You are here: Home / Events / WC Handy is Inducted Into the Blues Hall of Fame

WC Handy’s Autobiography “Father of the Blues” has been selected as an inductee into the Blues Hall of Fame at the Blues Foundation’s 38th Annual Induction Ceremony. 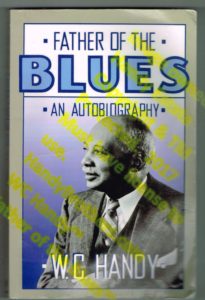 The Classic of Blues Literature pick is the rightfully recognized Father of the Blues, W.C. Handy’s 1941 memorable autobiography. John Lee Hooker was among the Hall’s first inductees in 1980 and now his 1966 Chess album Real Folk Blues will enter the Hall of Fame in the Classic of Blues Recording Album category. The quintet of Classic of Blues Recording songs includes Bo Diddley’s signature tune “Bo Diddley,” Tommy Tucker’s much covered classic “Hi-Heel Sneakers,” the Albert King hit “I’ll Play the Blues For You,” Son House’s “Preachin’ the Blues” and “I Ain’t Superstitious,” which features 2017 inductee Henry Gray playing on Howlin’ Wolf’s well-known 1961 recording.

Tickets to The Blues Induction Ceremony

The Blues Hall of Fame Induction Ceremony takes place Wednesday, May 10 at Memphis’ Halloran Centre for the Performing Arts and Education. The evening begins at 5:30 p.m. with a Cocktail Reception, followed by the Induction Ceremony at 6:30 pm. Tickets for this open-to-the-public ceremony are $100 per seat and can be purchased online at blues.org or by calling The Blues Foundation Offices at (901) 527-2583.

For information on licensing any of WC Handy’s song, images, or works, please contact us and someone will get back to you within five business days.

Excerpts from Completed Documentary by Joanne Fish, 2016, with permission.